The dogs aren’t the only ones that put a winter coat on, and yes, it does make a big difference! Shorts all winter, long shorts would’ve been nice one day, -23 degrees Celsius at Wedderburn. The rabbiting dogs have noted spring has sprung, the birds are singing, lambs all over the place, daylight saving has kicked in, the extra hair has all come off. And there is young rabbits all over the place. The best thing to see those young rabbits? The dogs! There is nothing, and I mean NOTHING they love more than ratting those little rabbits out because they are a very tasty wee treat for the dogs. I call them snackpacks just because well, that’s what they are, two mouths full for the dogs and they are gone.

The rabbits are all pregnant,  and most of them are on their second litter.  In some areas I’d take a calculated guess and say they are on their third litter which isn’t bad considering we are at the end of September, of course the “isn’t bad” depends on how you look at it.   All the rumours are true about them, they are eating rooting machines.

The ferrets are away on Monday for a week or two as a mate has a lot of that work to do and is a bit short on ferrets at the moment himself, so between mine and his he’ll have a nice wee squad.
There is certain areas that benefit greatly from using ferrets, areas where you’ve got numbers down via other methods and use them as a type of mop up tool or areas were you can’t use some methods, like built up areas or lifestyle farms where there is houses all over the place.
Shooting and poisoning around those places is often not possible or is frowned upon, then the ferrets really come into their own…

Ferrets, and more so rabbits, are cropping up a lot more in the Otago Daily Times of late. One can only assume it’s because there is a lot more of the later appearing in the last few years. Reporter Mark Price got in touch a few days ago wanting to do a piece on using ferrets as a form of rabbit control, so out we went with all the gear plus a photographer from the ODT Craig Baxter.
http://www.odt.co.nz/video/regions/central-otago/346417/rabbiter-puts-ferrets-work

A very effective tool in a spot like this is getting ferrets into the warrens. Open paddocks with a lot of rabbit warrens had ferrety boys on a killing rampage underground while pushing a lot out for me and the brothers, Bolt and Tom (on the left) to keep us busy.

Life of a rabbiter
Started the day at about 2100 with the spotlight, rolled into bed about 05:00 Then got the dogs out at 0900 till lunch.
This afternoon it was out with ferrety boys and the long net, and an offsider which is novel.
216 rabbits have gone to the dark side. Good thing there isn’t much to do when it comes to rabbits in Otago! 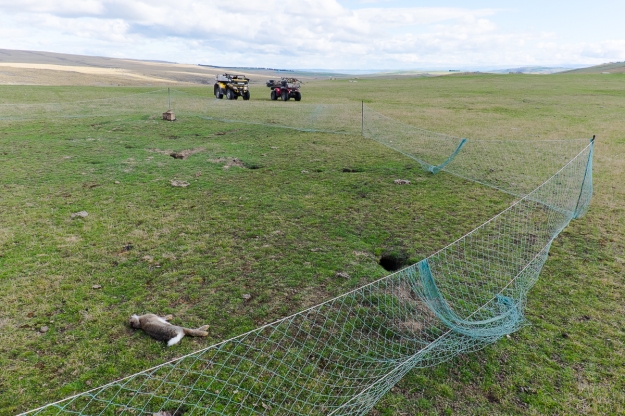 A long net in action, great tool around warrens.

The above is a picture of a longnet, put that around a warren and let the ferrets in then stand back for a few minutes. The action will come soon enough.

The old crew of ferrets, Cut and Blue.

A few action shots of the ferrets working around buildings.  Taken by Jill King at Grampians Station in the Tekapo area.

We also have a matched pair of ferrets for pest control. These guys are great around farm buildings, rubbish piles like old trees dumps etc and magnificent on rabbit warrens.