We’ve gotten real flash at Kill That Rabbit LTD, we now have a maternity wing at camp. Fly is on the left with a litter of little rabbiting dogs at foot, Jess is on the right expecting a litter later this month.

Not an unusual sight to see Jack with the black nut sack digging yet another rabbit out, this one is up Arrowtown way Central Otago.

Not long after this was filmed he started growling at any other dogs that came near, that means only one thing, he’s close! Sure enough within five minutes he had another notch on his belt, the old bastard has worn several belts out now 😂

Well here we are again, the breeding season for rabbits in New Zealand will be well under way! In order to see those young rabbits in Central Otago in August it means the mating will be happening now in June. 28 day gestation period for rabbits (pregnant again within 12 hours of having a litter), a few weeks in the nest then come August out they come.

If your planning a poison drop then best you get on with it if you want maximum success, the reason is straight forward, if you leave it till August the young rabbits can survive without mum but are to young to take bait.

We had a visitor for a couple of weeks, old Bolt came up for a holiday while Evalynn was away. He enjoyed getting out for a few runs with the team smashing a few rabbits around camp. Of course him and Jack said gidday to each other then where straight back to their old ways, growling, barking and snapping at each other.
Bolt’s looking a bit more grey and has slowed down a lot but is enjoying retirement.

Meet Levi the bat eared whippet, not a year old yet and already a stunning rabbiter. God knows what he will be capable of by the time he’s two or three! I’m really looking forward to seeing him develop.

And yes, that is another whippet pup in the background, of course I’m keeping one!
Plus the kids talked me into keeping an extra from another litter, these are out of Patch by Jack with the black nutsack.
So much for cutting the dog numbers down, but there’s a few heading towards retirement age so need to get their replacements operational. 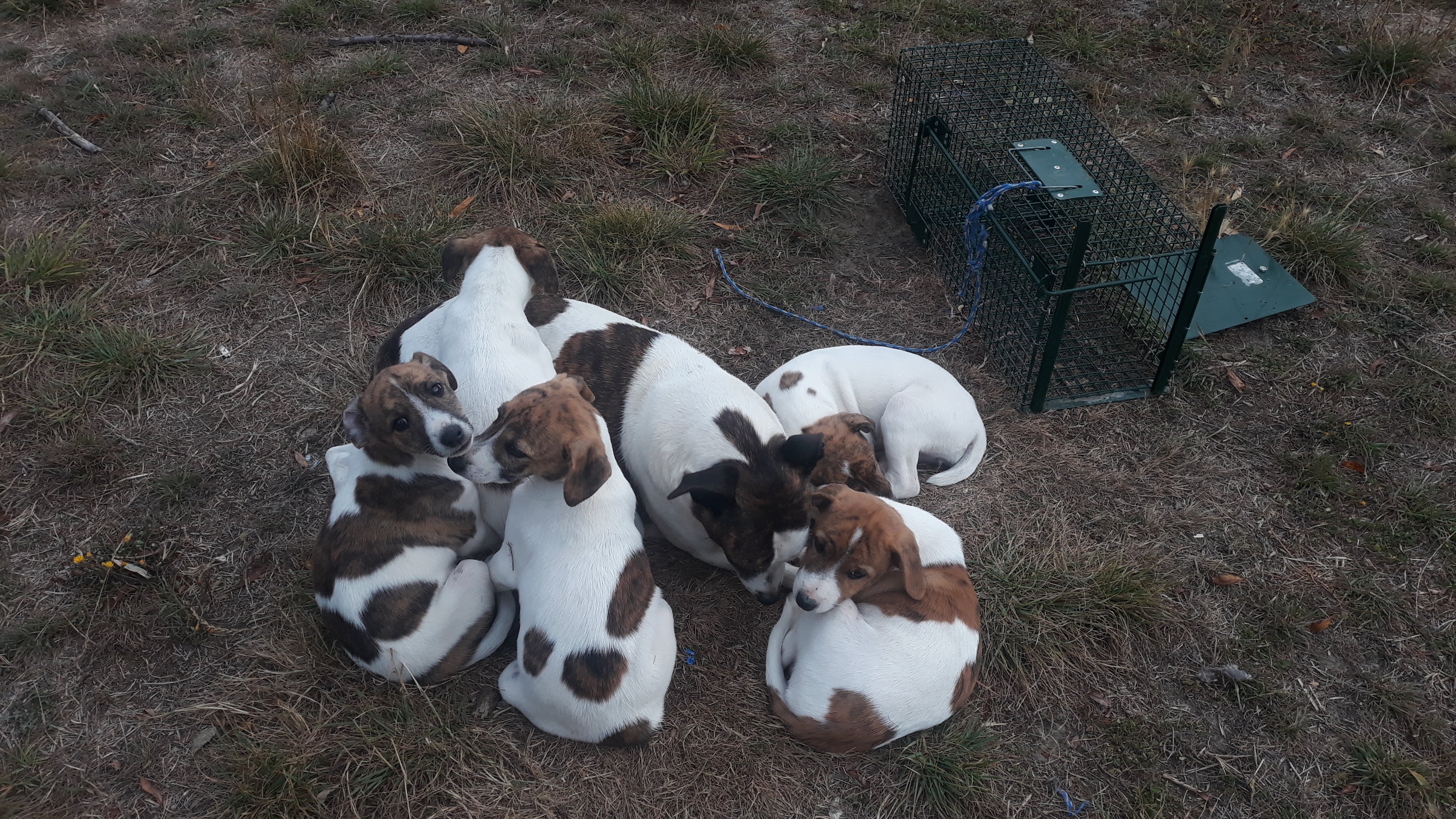 So as you can imagine it’s been kaos around here, two litters five days apart and of course lockdown has meant they have been here a lot longer than normal.

Time for a good yarn up since I haven’t posted for a bit… The rabbits have been busy! Even though the people around Otago haven’t noticed due to the massive amount of grass around they are there, now the grass is dying off all is being revealed which is a lot of rabbits. HAha, they fooled the people again.
If I’d had an offsider to take a photo the day I got this pic it would have been four fat bastards in a row! The art work just keeps coming,some very cool and some has me scratching my head.

The rabbits above were caught in a drop trap, very effective method if you have good fencing. The photo below is one days catch from two drop traps. 35 rabbits in that pic.

Had a young fella coming out a bit lately, he’s getting right into the swing of this rabbiting thing. Meet Angus.

And to wind this up a photo of Jo relaxing after yet another hard day at the office. 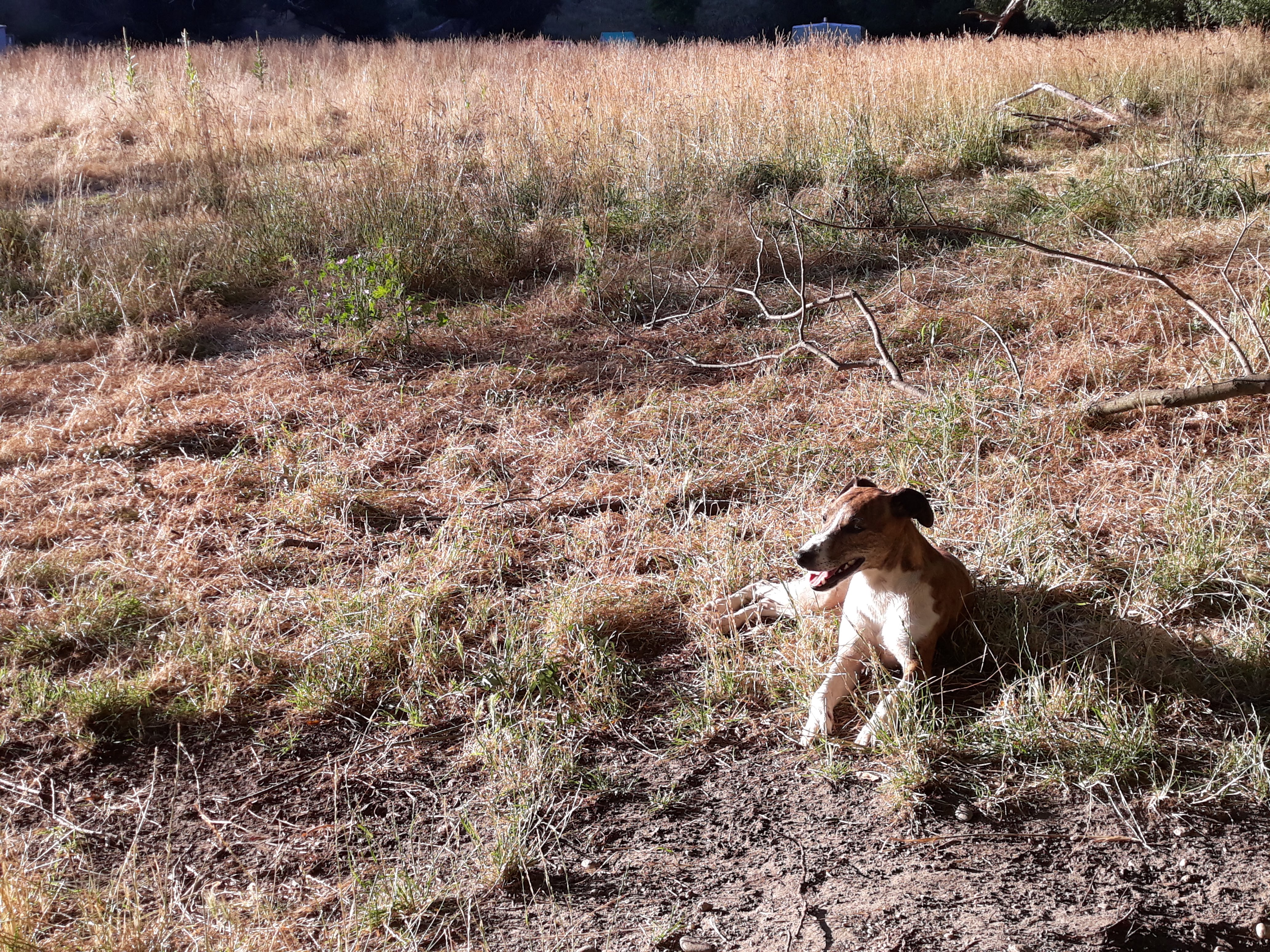 Why yes boss, there is rabbits in here. We’ll just sort that for you in a moment.

Three rabbiting dogs retired and away to new homes and another that hasn’t worked out as he keeps nailing ferrets, which is no use to us.

So Coffee, the best dog I’ve ever had for rabbits, Bolt who is another cracker and Pip. A solid workhorse who at five years old is really struggling phyiscally with the job now are all away to new homes along with Boy. A real shame I can’t get the ferret habit out of him as otherwise he was shaping into a real wee workhorse.

So now its time for the young dogs to step up to the plate and shine.

Man has there been a lot going on in the last few months!  Killed a lot of rabbits somewhere in there as well. But that’s what we do in Otago, rabbit capital of New Zealand right here.
So time for some random things that have happened at Kill That Rabbit in the last few months in no particular order….

While all of you were;
A: Getting pissed
B: Being introverted
C: Spending quality time with your significant others
D: I don’t want to know…..
We were out setting a new record for us, new years 2017 we, Shaun and I, shot 823 rabbits AND knocked off early. Then think, we shot that huge number on just 11.5 Hectares. One shooter, I was loading, counting and driving and let me tell you, I was flat out.
We also went back a week later and shot another 380+ odd plus ferreted it etc. That one block has had way over 1500 rabbits killed on it, which brings up a funny story…
I was talking to a woman that ended up holidaying right beside that particular block just after we had a killing spree there. They couldn’t work out why random dead rabbits turned up and what the bad smell was.
Not every rabbit dies on the spot, and there was waaaay over a tonne of meat and guts rooting on the hill. The hottest summer on record, tonne of meat and guts on the hill, it was a thing to behold…
Oh, and we shot out that rifle that night, is seems having a loader and continuously shooting can be hard on barrels. Opps. 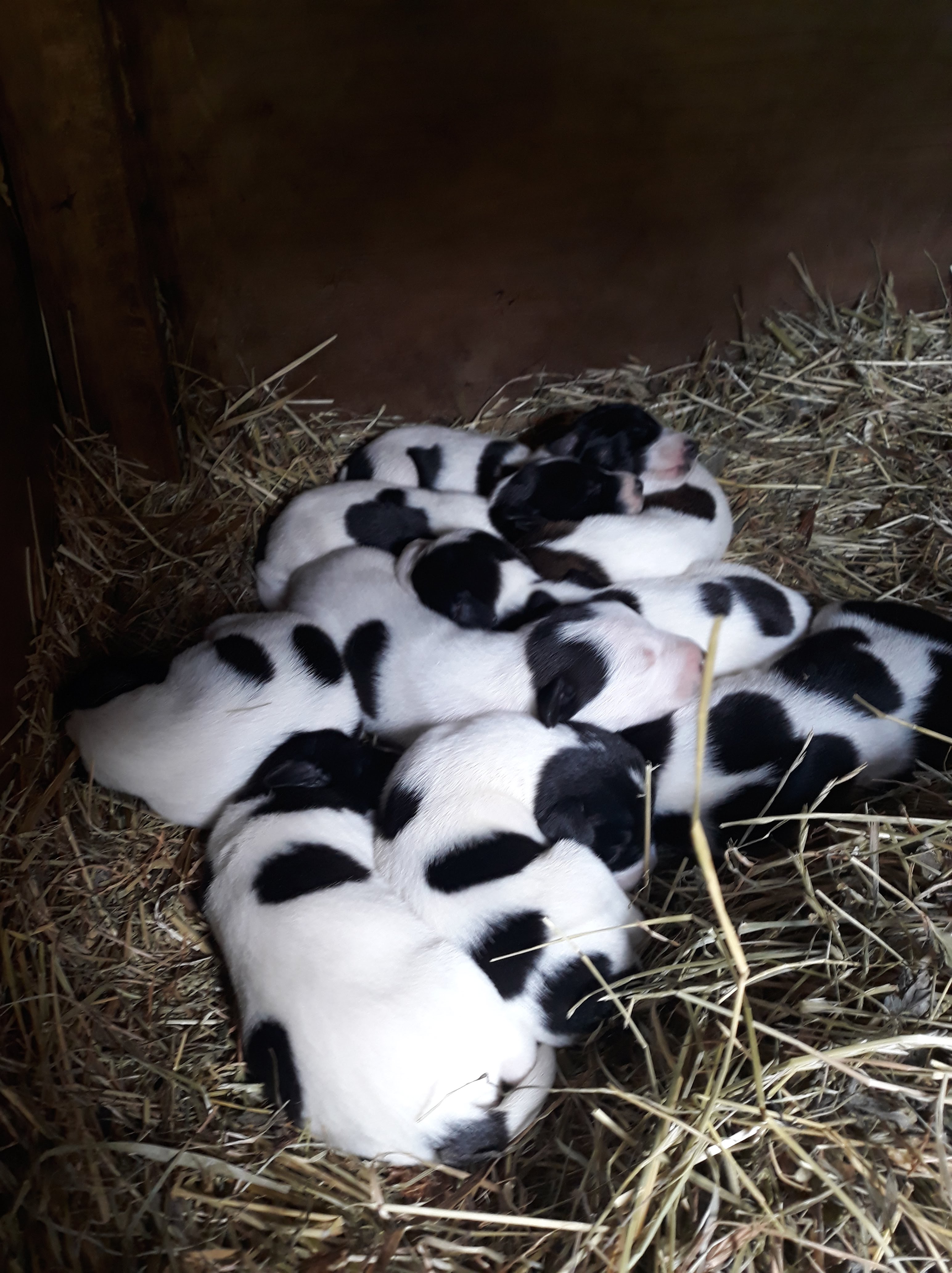 Lots of pups and Jack is the father. Today Google informed me this is a five year old photo of Jack (with a black nut sack) which I’m shook about, I thought he was four at most so how wrong was I? Someone stole the dog he is sleeping on. Not literally cause I let them. 🙄

Young Evalynn fell in luf in shit so just had to move to Invercargill, cause, well that’s where Michelle is and we can’t keep a young lady away from her man… I’m waiting for the baby call.

As I mentioned in the last post, the new virus is about to be released. For some reason it’s all secret squirrel stuff when it comes to the Otago Regional Council telling people what’s going on. I’m sure there’s a good reason…

My son that’s left school now works for Kill That Rabbit, he’s a machine with the rifle and is going very well working with the ferrets. He is also going very well with the air rifle having an extremely good hit rate with that piece of equipment, a grand bit of gear it is to around built up areas. Next for it will be a thermal scope.

One of the dogs killed a ferret, a fine ferret he was as well. Pepper had been with us for a couple of years and killed many a rabbit. I have no understanding why Jack decided Pepper should die but I can tell you I was decidedly unimpressed.
We had words, strong words.

I’ll bugger off and leave you to it. Bastards. LifeOfARabbiter

It seems we are into a bumper season for the rabbits as they have started very early, here we are at the start of July and we are already digging nests up and seeing young rabbits. A litter of eight was found two weeks ago and everything is heavily pregnant or has already dropped.

These were got last week, very well developed rabbits for this time of year.

We also have a litter of puppies on the ground and ready to go!  Knowing the parentage these should be great rabbiters.   They’ve just come home after being rared by a young lass,  it makes for such better dogs when kids are around as they handle them so much, where as adults are always a bit busy….

The team hard at work on Andrew Farms in Hyde, Otago. We’ve put a lot of work into this place and it looks very different now to when the rabbits were there in big numbers. Now it’s a case of a quick going over every so often just to keep it right.   They got the rabbit out and it didn’t take long. Hard country on the dogs but they love it and this one got nailed.

I just checked the dog diary today to see some ages, looks like there will be one retired mid 2015 as he is getting to the age of seven. For a working rabbit dog this is a good life span, one in particular is starting to slow down. Old Rua (Ru for a working name) but the old bugger is sneaky and still catches more than his fair share.  Bit of a grumpy bastard with the young pups, but still has a play with a few of the other dogs when he is in the mood which isn’t often.

The older retiring dogs I put on Trade Me, a local auction site. Always for free, but I like them to have a few cruzie years once they’ve finished rabbiting.   A lot of people prefer an older dog so it works out well for everyone.

All of the dogs in this photo apart from the white English Pointer on the right are two years old or younger.